I got my package this last week and it was in perfect condition - well packaged for shipping. The frame is now hanging proudly on my wall for everyone to enjoy. I absolutely love it. 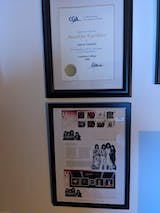 This framed display of Queen stamps is absolutely awesome and beautiful. I am so glad I got one. Any Queen fan would love it.

have still to receive this item.

Royal Mail have just announced the release of thirteen official Queen Stamps, to commemorate 50 years since the iconic band was first formed in 1970.

Released on 9 July, they are a MUST-HAVE piece of memorabilia, featuring eight of the band’s most iconic Albums, from A Night at the Opera to News of the World, as well as the exclusive ‘Queen Live’ Miniature Sheet, featuring all four members of Queen performing live.

What makes the ULTIMATE Edition ‘ultimate’, is that it comprises BOTH official Royal Mail First Day Covers alongside the stamps’ official release notes – and has been mounted and framed, ready for you to display in your home or office.

Significantly, the stamps have been officially postmarked by Royal Mail with a special cancellation on their first day of issue – 9 July 2020.

Remember, JUST 995 ULTIMATE Editions will ever be issued WORLDWIDE. That makes this set one of the most limited ways to own these sought-after Queen stamps…

This is a must-have piece of memorabilia for any fan of Queen. Secure yours today.