A
A.
Lovely coins!

The coins are lovely and they will fit into any collectors album. They will become more valuable every Christmas as the years go on.

Now, to celebrate this Christmas season, FIVE brand new coins have been authorised for release by Guernsey Treasury and fully approved by Her Majesty the Queen.

Over the last few years new 50p coins have launched a whole new generation of collectors, and these latest 50p coins have the potential to become some of the most sought-after 50p coins ever. Demand is expected to be very high.

All five coins are housed in a festive presentation pack and importantly, this is one of the only ways you can own all five coins as a complete set.

Don't miss out – click the ‘add to cart’ button now to avoid disappointment.

Also available to own in the strictly limited Silver Proof Collection >> 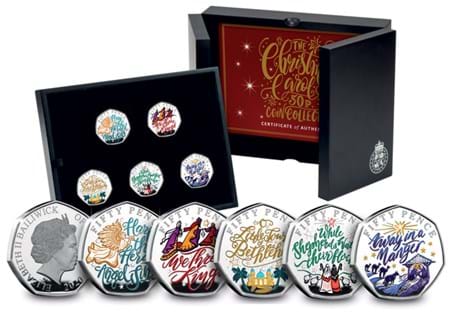