A Hero has at last been recognised thank you Alan

I love this coin and the story of this wonderful man and the contribution he made to the world .

Gentlemen,can you not enjoy the gravity of this photo?

Combination of imagery and lettering invites curious minds into the decoding world of WWII mastered by Turing!

Hi all not sure how big my collection gonna be but have some questions about the coins. I had no time yet to appreciate all my coins yet and the hidden code but I will thanks 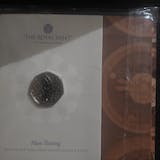 Famous for his leading role at Bletchley Park, breaking Nazi codes during the Second World War, it's believed that his team's work saved millions of lives by securing and deciphering information from German forces.

There are three hidden codes on the UK Alan Turing 50p — can you decipher them?

The design itself includes three code breaking elements, but can you see them?

Code 1. GEARS.GRIN.THAN — Every 3-square-meter of the world has been given a unique combination of three words. Go to ‘whatthreewords’ to find the location where Turing studied…
Code 2. ‘ONLY A FORETASTE OF WHAT IS TO COME’ — Turing’s quote in The Times, June 1949
Code 3. Matt Dent and Christian Davies — The coin designers initials

Your 50p coin has been struck to Brilliant Uncirculated quality and comes carefully sealed in a stylish presentation pack from The Royal Mint. Plus, it's available at The Royal Mint’s official issue price of JUST £10.00 (+p&p).